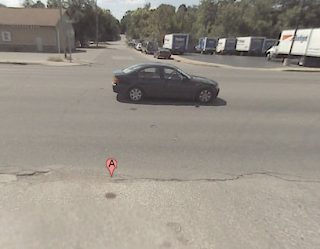 The HAWK light that was planned for the intersection of Walnut and Allen which was to be a part of the Allen Street Bicycle Boulevard, has been put on hold for now. Susie Johnson who is the director of Bloomington Public Works explained that the current bike/pedestrian refuge island that has been recently installed is only a first step.
Depending on continued analysis and feedback additional features, like the HAWK system, may or may not be added to the intersection. According to Johnson, the incremental process was recommended by Alta Planning & Design.

The decision was to gauge the success of the island and make changes as needed, as well as to ensure the dollars are invested effectively in the implementation of Bloomington's Greenway Implementation Plan. This strategy was supported by Public Works, Economic & Sustainable Development, and Planning.

Posted by Jonathan Richardson at 8:44 AM No comments: 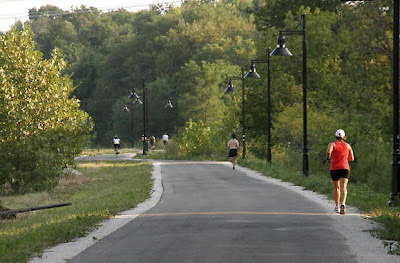 Public input for the Switchyard Park Property master plan during an open mic session on Monday, May 14 from 5 - 6:30 p.m. at the Bloomington Convention Center.

There will be a public presentation of the conceptual designs on Thursday, May 17 from 6 - 7 p.m. at City Hall - Showers Building. The design team will use information gathered about the Switchyard Park Property site, as well as feedback from stakeholders and community members, to create a vision for the new park design. Several design concepts will be presented for feedback on May 17. 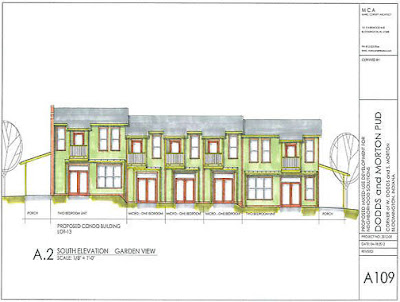 Today the Herald Times reported: Development at 223 W. Dodds Street, along the B-Line Trail that includes single-family homes, condominiums, apartments and commercial space received a favorable recommendation Monday, May 7, from the Bloomington Plan Commission. The proposal calls for single-family homes to be built on 12 narrow lots, a five-unit condominium building and two mixed-use commercial buildings with a total of four second-floor apartments. The homes and the larger of the two commercial buildings will face the B-Line Trail and have sidewalk connections to it. McDoel Gardens resident and developer Matt Press said he hopes to attract a restaurant to the larger commercial building, which will resemble a circa 1900 clapboard-sided train depot. The smaller commercial structure will be built to look like a circa 1900 carriage house. The plans now to go the Bloomington City Council for its consideration. For more details on the project please follow this link to the May 7 Bloomington Plan Commission Agenda.
Posted by Jonathan Richardson at 12:07 PM No comments: